Posted by Aadil Cajee on Wednesday, November 25, 2015 Under: Aadil Cajee

11 long months of dreaming, knot practice, casting practice, gym, gear prep, packing, unpacking and repacking finally came to an end on the 14th November. The day had finally arrived, months of excitement, peaking and crashing multiple times coupled with trying not to build expectations, and  then nervously watching the weather as we got closer to the time. We got the news that the week before us saw some ugly weather come through with some anglers having their trip cut a bit short but as plenty dua would have it, the weather held out through the 4 days we spent on the banks. 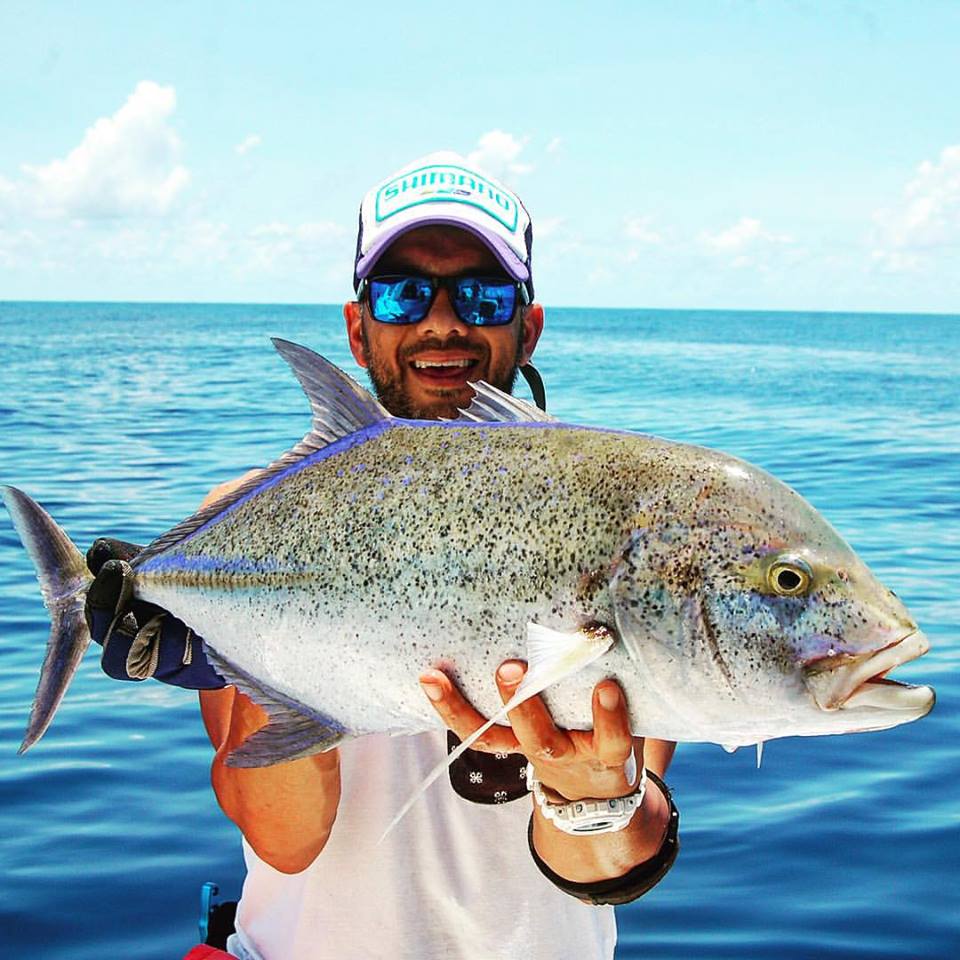 Our group was made up of 4 friends and 2 guys who joined us (by the end of the week we could safely say 6 friends), Kirk from GoFish mag together with the skip and crew of the Dandelion. Perhaps a brief intro into some of the characters is in order:

Mark aka Ninja Mark – GT Popping Wikipedia, tackle whore of note, aptly named the Ninja for silently slaying fish while showing absolutely no emotion even when a BUS GT smashes his lure next to the boat – I mean nothing, not a word, not even a grunt, a grimace – just gives you nothing to work with! – after the week we were still not sure whether the Ninja was hardcore or whether everytime a fish hit him he went into shock (my money is on the latter). All round probably the nicest bloke you would meet.

Kirk Newton  – I organised the charter through GoFish, and pretty glad I did. Kirk together with John (owner and skipper) put together a great charter. He played guide, supporter, cameraman and probably the guy who screams the most and loudest when other guys go tight! 10/10 bru

Otto Gerner – climbing onto the yacht I looked at the older Afrikaans gent, built like a friggin tank, his big white beard making Munier’s beard look like a manicured garden, his weathered eyes giving me a stare down and thought… oooo k@k, hier kom ‘n ding……BUT…the man was a legend, joined the crew not expecting much, first time popping but worked tirelessly everyday and produced the goods! He made some of the guys look like pansies with his work rate and commitment to getting a bite. We got on like a house on fire and in the end all grateful that our paths crossed. Oom Otto, much love and much respect!!

We set sail around 5pm on Monday evening, it was a long rather bumpy 13 hour commute to the banks. Yusuf and Munier both succumbed to some seasickness so had to spend a good part of the first 24 hours or so chumming over the side. Good sports though, neither made any desperate requests to be returned to shore…. And if they did they would have had to swim!!

Time doesn’t allow a blow by blow account but will describe some of our experiences and highlights over the 4 days, then leave the pics to do the rest.

From day 1 the weather was incredible (maybe a little too incredible), the mostly very flat conditions and fairly weak current didn’t make it ideal for chasing the G-Bangers but we fished hard nonetheless. It was hot, really hot, the body loses moisture like mad, I had never seen sweat ooze out the pores of my fingers before but it happened out there! 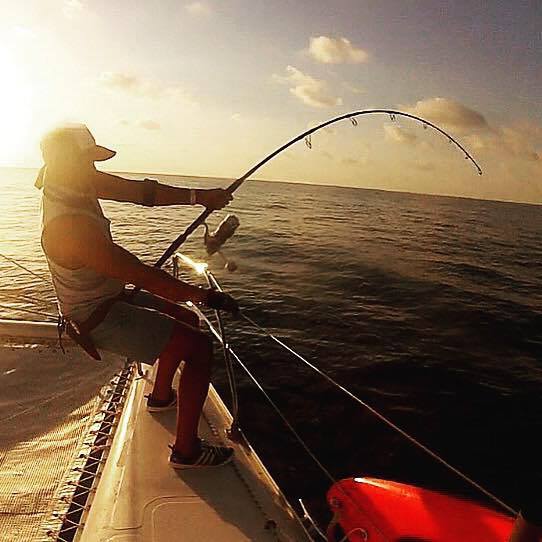 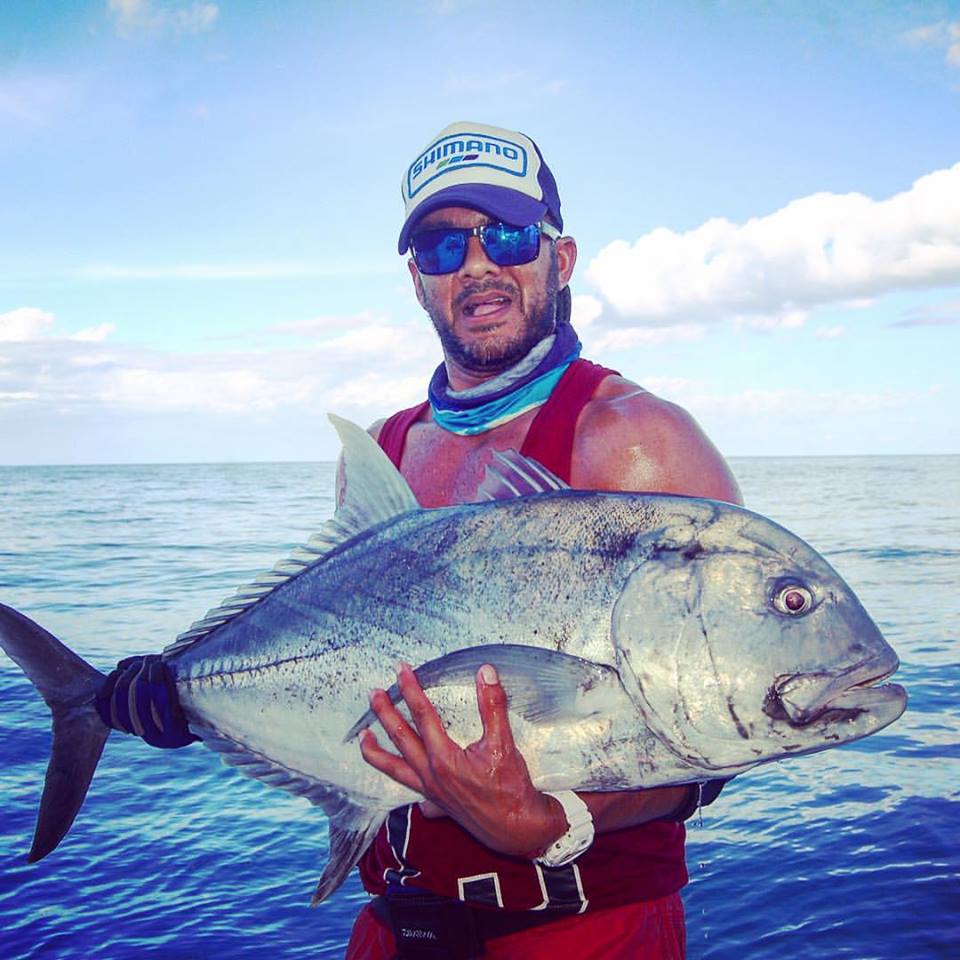 We purposely tried to spend as much time as possible on the GT areas, then trolled between spots and spent some time over the deeper drops in search of doggies or tuna. Everytime we went on with something on troll we would start dropping heavy jigs or throwing plugs.

GTs – they were hard work, we had to really put in graft but it paid off with us getting 1 or 2 on every drift. We also experienced 2 pack attacks which I will describe below. Given the ultra flat conditions, it was often the furthest cast and biggest pops that drew a strike so you had to put 10/10 effort into every throw and every pop. Every night the joints in my fingers would ache from holding the rod tight all day, my ribs were bruised up from the constant popping and had some nice stripey bruises on the legs from leaning on the cabling all day. Popping of the cat was tricky given that the vessel is not purpose built for fishing but after some adjustment we found a system that worked and all was great. Funny enough of all the GTs we got, only 1 fell to a stickbait, the rest skewed towards popper with the balance falling to the good old GT ice cream plug and Orion flapper.

1.       On day 2, after we figured how well the plugs were operating, the Ninja puts on a monster Orion Flapper (200g rigged) and gets smashed by a big black BUS right next to the boat. The height of the cat coupled with the ridiculous visibility made popping so exciting because you could see the hits so much better!!!  As Ninjas do, he was emotionless with his hardcore stance (still convinced it was just pure shock), he dug his ninja slippers into the floor as it stripped the stella 18k on a pretty much locked drag down to the reef  and within seconds made short work of his leader… (big Orion order coming up!)

2.       The Ninja and I casting out the front of the boat throwing plugs, out of nowhere a pack of 5-6 angry geets start wrestling each other to get onto Marks plug. He goes tight and I put in a cast and got smashed and reefed in 3 seconds flat. I threw the rod to the floor and picked up my lighter stick (Saltiga 80TN, Stella 8k and 50lb) and threw out a smaller 70g flapper, 3 turns in and it gets destroyed in mad array of dark shapes and fins…. DOUBLE UP BOOOOIS!!!!!

3.       Last day, similar story, Oom and I popping, sun is making its way down, he makes a long cast, as it lands I see a few bow waves head for his popper and quickly reel up to get in the zone. Oom goes tight, my popper lands and on the first pop…. No drama it just vanishes, inhaled… Game on!!!

1.       We were not keen on trolling at all but everytime a rod went off the newbs Yusuf and Allen would generally man the rod while the other okes dropped jigs and threw plugs. We had 2 awesome sessions one dropping big 300g jigs in 80-120m of water. This is another story on its own. As Yusuf put it – “Guys, please remind me why we’re doing this? The lure is heavy, the rod is heavy, the reel is heavy, this sun is heavy, these waves are heavy…. It’s all so heavy!!!!” The collective reply was “Shut up you woes and keep jigging….. and…….. TIGHT!!!! We had a frantic little session with the YFT on jigs.

2.       Tuna again, the visual bust ups on bait were incredible. Watching big tuna destroying baitballs was incredible often sending baitfish flying 2-3 meters out the water. We just couldn’t get close enough to cast before they would disappear. Nonetheless, we did have a session where the feeding tuna drifted close enough and we started throwing plugs and spoons out. Mark goes tight in a massive blow up followed by Munier, then Oom goes on loses the fish and goes on again and loses the fish only to go tight finally. While this frenzy was happening I went on as well and so did the quiet Allen quietly casting a spoon on the back of the boat. Definitely a highlight!

Doggies were scarce, Mark hooked and fought a beast doggie for a while and we were probably 5m away from getting it to the boat when it dived and cut him off on the keel! We also caught liveys at night and sent them out getting picked up by sharks mostly but had a GT and another doggie which also made short work of reefing me a couple mins into the fight. 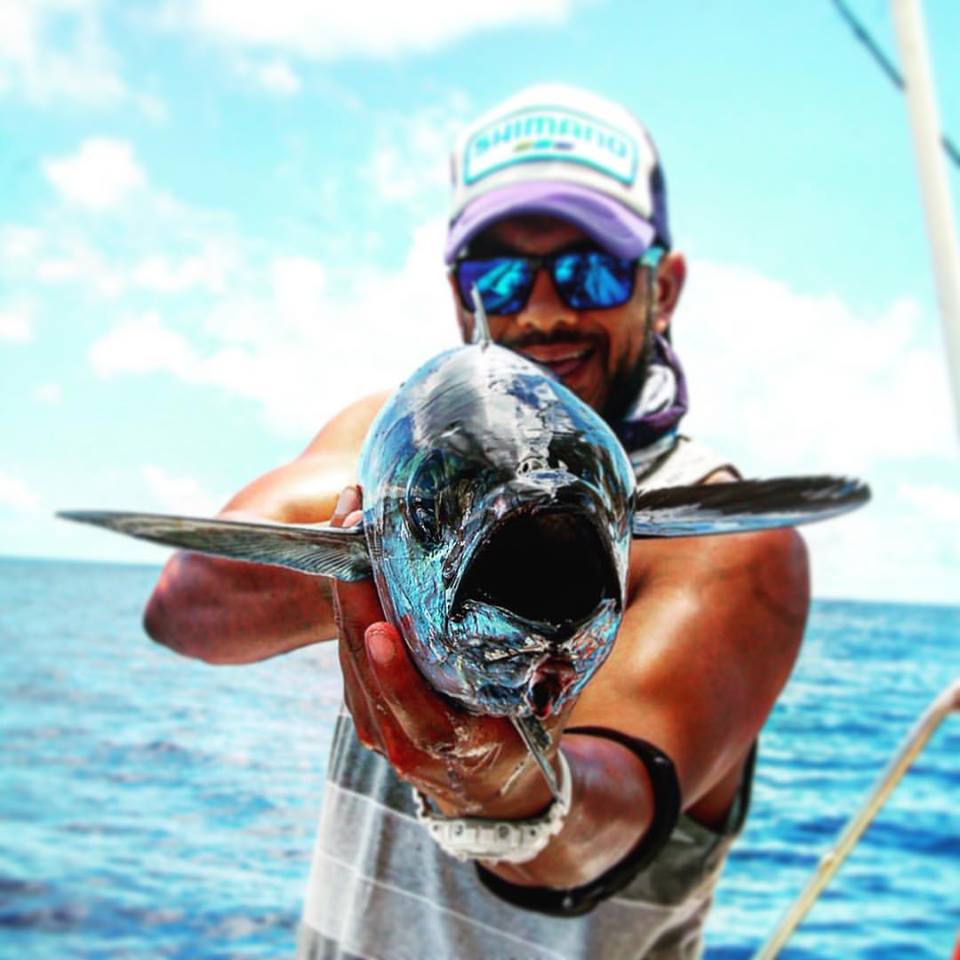 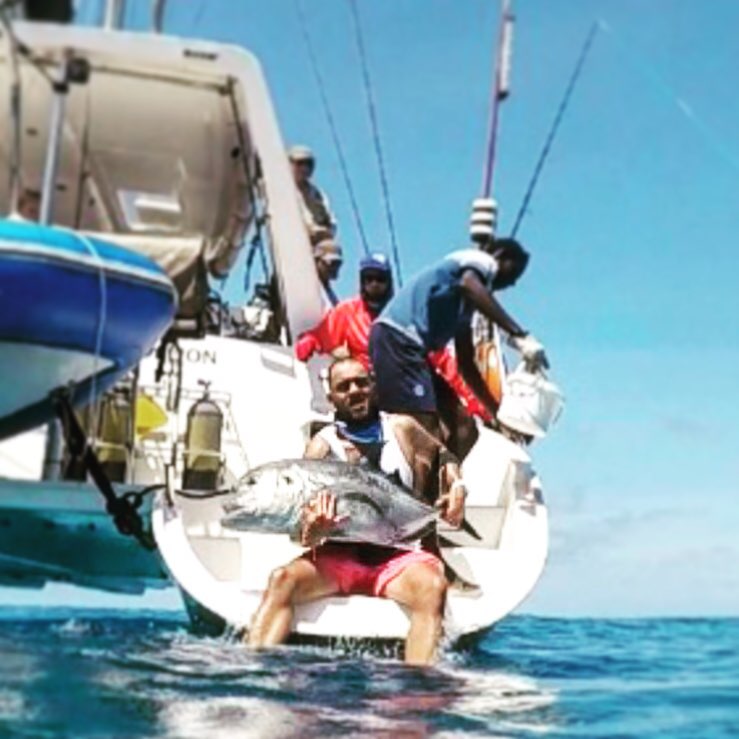 When a small break was needed while popping we had plenty fun dropping smaller bucktails and small jigs over the reefs and got countless reef and bottom species, plenty green jobbies, the beautiful Bluefin kingies and also a couple trigger fish – really great fun, sometimes going on shot for shot.

Not sure this captures it all, didn’t even cover the massive pods of dolphins, room sized turtles, the amazing sensation jumping into that water when the body was overheating, the experience of a swimming release, the many hours of crap talk on the trampolines watching the magnificent skies, the deep conversations about religion, South Africa, fishing, politics and the rest, the true peace of being totally disconnected from the world for a few days and then there was that moment I sh@t myself getting out the water literally 2 seconds before a 3m long tiger shark was pretty much on me (k@kd myself properly here, no lies!)

Laz should definitely be on every anglers bucket list, it is a place of magic. Sadly I don’t know how long it will last, there were a number of illegal fishing boats there from the Comores whilst we were there…….

All in all, a magic bunch of guys, an epic week, an experience I will treasure and something I would do again without batting an eyelid, as always very grateful to the Almighty for giving me the opportunity.

Cage out, enjoy the pics! 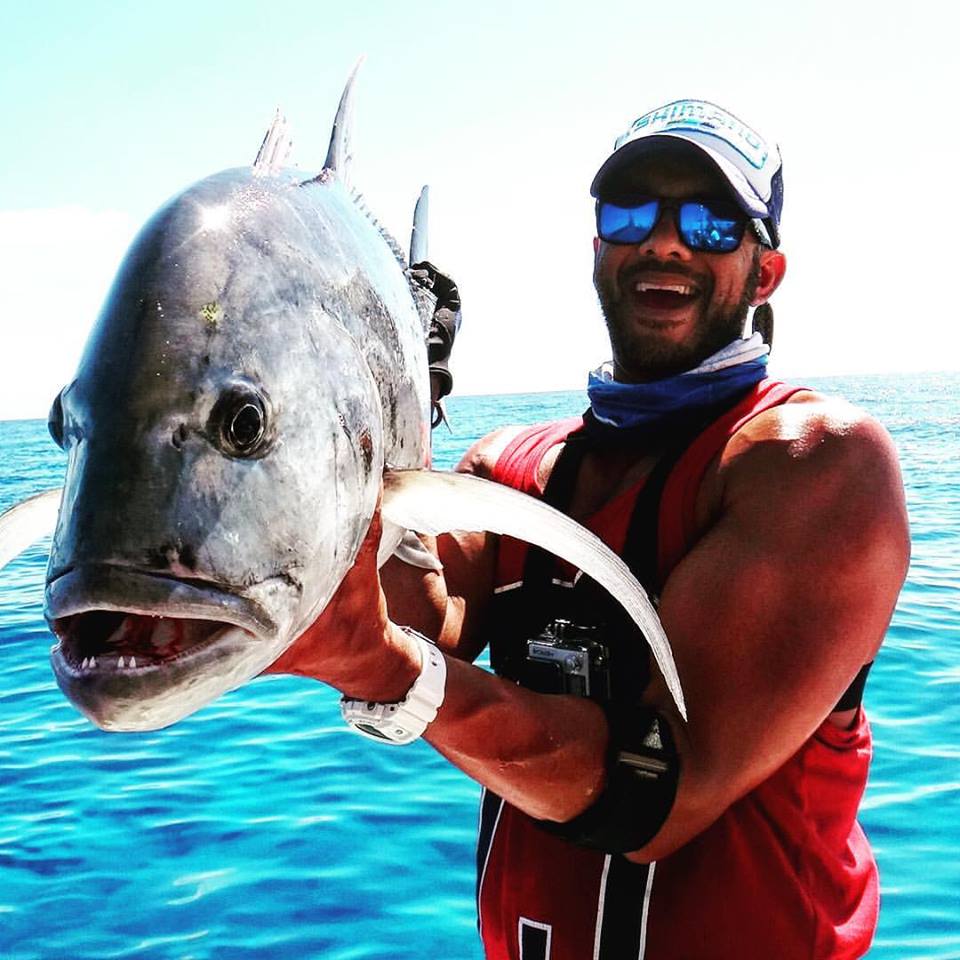