My annual trip to Kosi Bay is an event I start dreaming about months before the time. This year wasn’t any different. Weeks before the time I had already ordered the Windon leaders, Roosta poppers and slide traces. Ticked off all the necessary items on the check list and got more tackle just in case (tackle addict I confess)

We left Jozi at 05:00 and reached the Total garage in Kosi Bay 6.5 hours later. As soon as we got the necessary permits, we met up with the rest of the group and after stocking up on the last minute foodstuff and bait we proceeded to the camp at Kosi Bay mouth. This year our group was made up of a few “newcomers”. The newcomers were from Johannesburg and Durban and I must admit, these guys were great to have around. They were always helpful and game for anything. It had been a while since I laughed as much as I did on this trip.

For those that have been to this place, you will agree that it is one step closer to paradise. 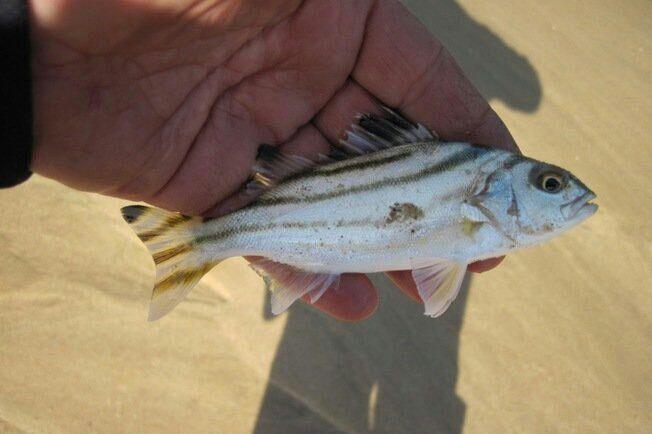 Situated just a few metres walk from the edge of the lagoon, you get the constant breeze off the ocean and the sweet sound of the crashing waves a mere 150 metres from the camp.

Our stay coincided with the end of neap tide, so after unpacking and settling down to a quick meal, we tackled up to catch some live bait. Thorn fish were plentiful and within a short while we were ready for the mouth.

For the newcomers this was a different experience. Some guys managed to catch the bait fish quite easily while others ‘donated ‘ their bait to these prickly little buggers.

The tide had already turned and a deep channel had formed at the mouth. I spotted numerous mullet jumping and this was a clear indication that some of the predatory fish were in the area. A quick cast in the centre of the channel and after a few minutes I could already feel the live bait getting very edgy.

My bait was probably 15 minutes in the water when the line went tight. The fish started taking drag and even with the Shimano Technium (medium) and a Torium 20 it was still an awesome fight. 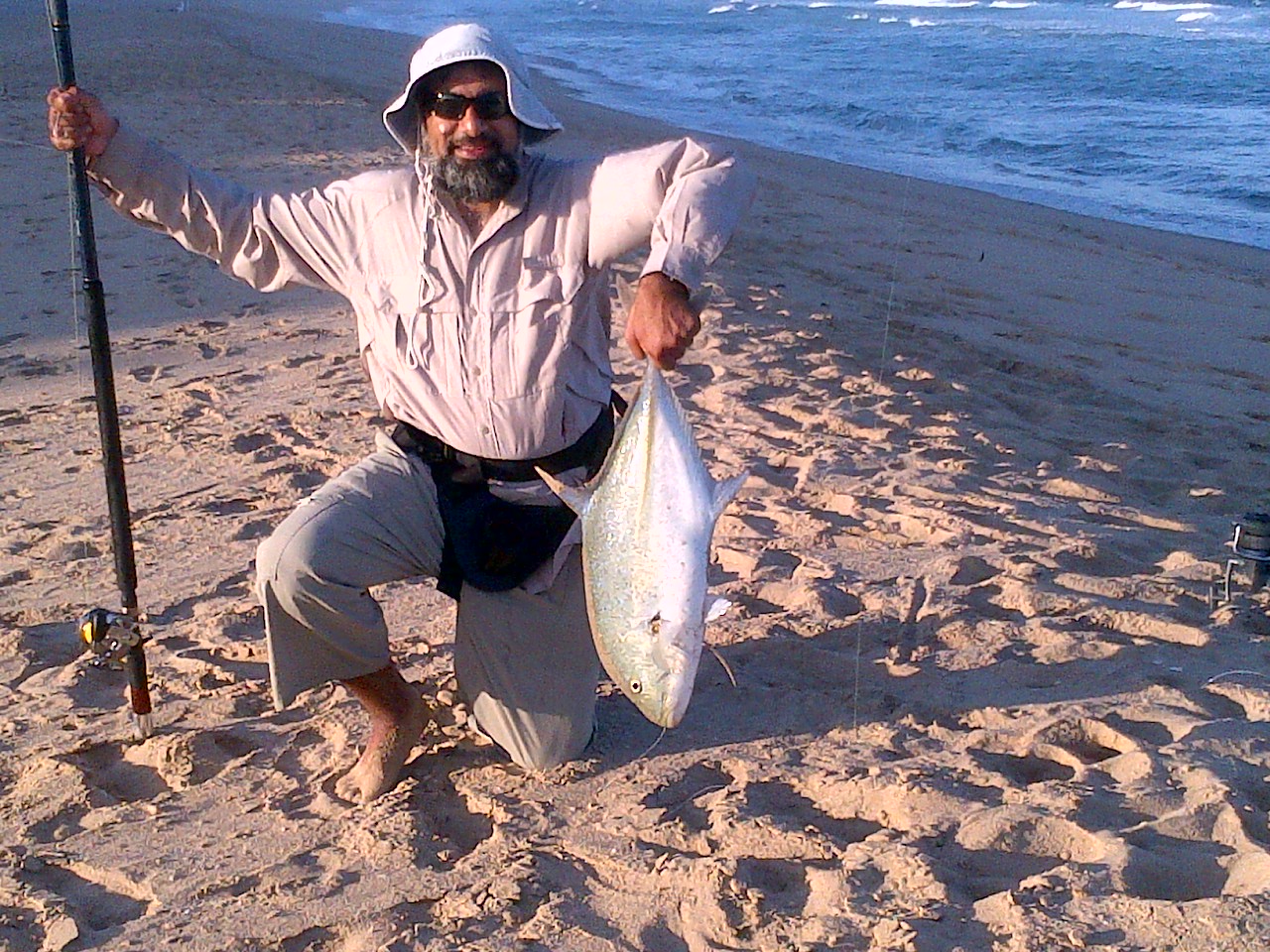 My first GT! (Giant Travally or Kingfish).  My previous trip resulted in no fish so I felt that I had to redeem myself. Over the next few days 3 more GT’s were caught, some even on light tackle.

Timing of the tides is very important and having bait in the water normally produces some result.

The mouth area is mostly productive at night; however some needle fish were landed during the day.

Over the next few days we caught some good Rock Salmon of about 4-5kgs, Stumpnose of 2kgs, black tails, wave grunter off the ledge at low tide and also some resident reef fish. We also got some excellent honeycomb rays, which gave a good account for themselves. 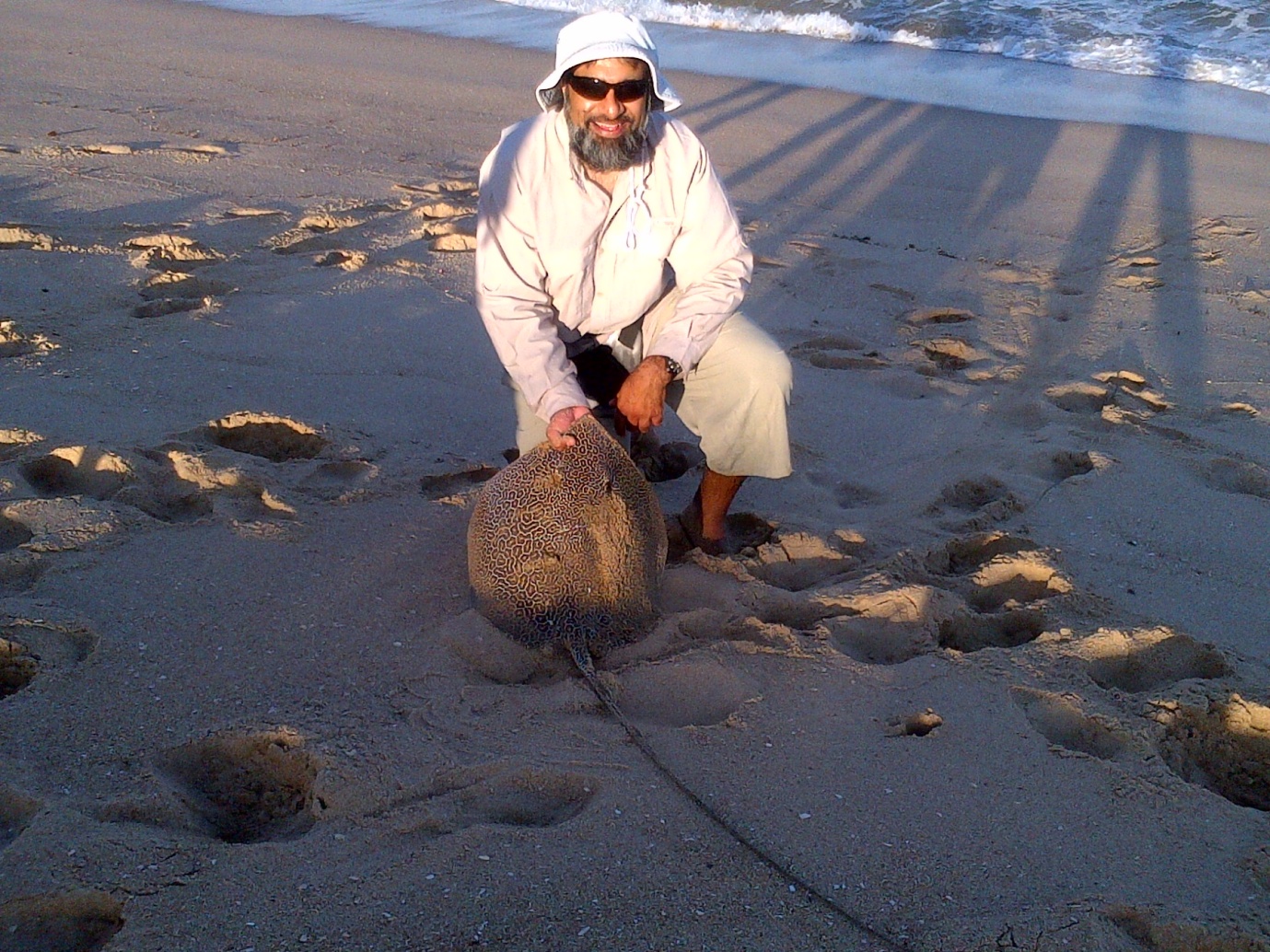 Without the distractions of cellphones and television, one can sit under the night sky staring into space and just enjoy the view of a billion stars. I couldn’t help to think how little we are in this beautiful universe. We should take the time to appreciate beauty around us for life is too short to stress about the petty and insignificant inconveniences we’re faced with on a daily basis.

If you want to share your fishing story, send pictures and details to adil@fishingfanatix.com.  Who knows, we could be reading your article next week!

Listen to the Screemin Reels Show on Radio Islam MW1548 every Saturday morning from 08:00am to 09:00am, Hosted by Ml Sajjaad Timol and Adil Mungalee